GM will begin repairing Teslas in 2024.

Semi-True. GM is actually repairing Teslas NOW. The brand said over 11K of the EVs have passed through its service departments since 2021.

Tesla is investing in brick-and-mortar locations to expand its service presence in the US. GM has thousands of dealer locations that already place 90% of the US population within 10 miles of a service center.

GM didn't disclose the nature of the service, but said they are ‘aok’ with the extra business.

Ford is building its first new plants in 53 years.

True. BlueOval City is the cornerstone of the company's plan to produce 2M EVs annually by 2027. The new plant will be in Stanton, TN, with a population under 500.

The $50B plan also includes two new battery plants in Kentucky, a research center in Atlanta, and an automation overhaul in 3 locations through a partnership with Rockwell Automation

Ford says its EV strategy requires room to grow, which led them to expand outside Michigan. Some worry about a lack of a United Auto Workers union guarantee, suggesting a plan to de-unionize the workforce.

Dominos is putting samurai swords on its delivery robots to keep your pizza safe.

False. However, Domino's pizza is buying 800 Chevy Bolt EVs for deliveries. The company is still experimenting with robot delivery but will explore EVs as part of its goal to be carbon-neutral by 2050. 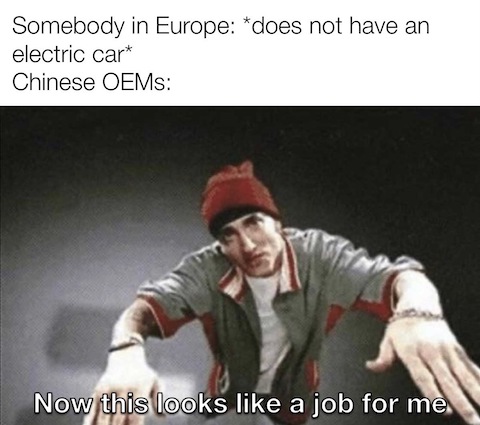 At least in Europe, a 200-mile battery range can get you through 9 countries before needing a charge.