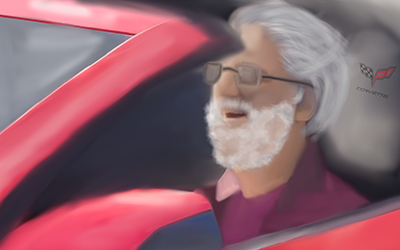 Like any of us, Curt Dawicki had dreams. The depths of which only he could have known completely. One dream he did share with the world was a post-retirement plan to own a Torch Red Corvette.

Last week, Curt's daughter called Ciocca Corvette and left a difficult message. Her father had been given just weeks to live, and she wanted to make at least this one dream come true while she could, and Ciocca invited them to Atlantic City.

By Wednesday, Curt and his family made the trip to the dealership to sit in and cruise down the highway in the C8 Corvette, care of Ciocca's team.

Curt passed away two days later. He left behind his loving family and a lasting imprint on the people who brought his torch-red dream close enough to briefly embrace.

Ciocca pledged money toward Curt's hospital bills and shared the GoFundMe link with the Corvette community in the faith they, too, will want to help support Curt's family.

Back To Basics Pt. 3

This week's ATUC with David Long revealed how rapidly the social media landscape is changing and how to leverage those changes for more authentic content that better connects with your audience.

“Y’all know what would go good with giving back? Some giving back…” -The Klamath team, we assume