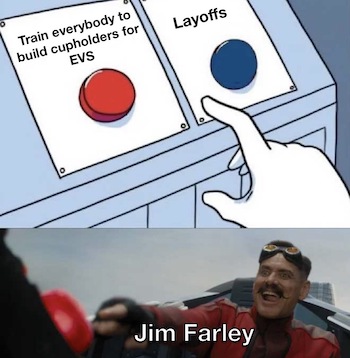 Toyota is showing off its two new Prius models and assuring critics there is more than one way to reach carbon neutrality. One is a pure hybrid, while the other, Prius Prime, is a plug-in hybrid.

While Toyota is not following other companies toward EVs, it does plan to be carbon neutral by 2050 - just using some other method CEO Akio Toyoda is keeping to himself for now.

Ford CEO Jim Farley says the company will return to the days of producing more of its components. EVs take about 40% less labor to produce, so the company will bring more production in-house in the interest of providing a role for everyone.

EV motors, batteries, and other components production will protect the workforce and push the company toward better margins - thus staying competitive against higher profit operations like Tesla.

GM is also eyeing in-house production as a path to greater profitability. Several deals are moving the company toward CEO Mary Barra's vision of delivering 1M EVs annually by 2025.