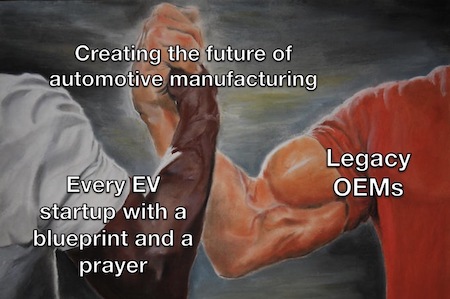 When legacy OEMs decide to put their massive influence behind a project, by default, the project makes big waves.

🔌 🚚 GM has decided to solve the charging issue in the US. The company is teaming up with EVgo to install 2000 charging stations at Flying J, and Pilot truck stops across the country. These 2000 join another 3,250 GM is already building with EVgo as part of a $750m investment. The fast chargers will be available at 500 locations along US highways to meet the needs of long-haul trucks and road-trippers.

🔋 🏭 Ford and South Korean battery maker SK On Co have finalized a deal on a joint venture to build and operate battery manufacturing plants in the US. The resulting JV, BlueOval SK, is expected to produce 60-gigawatt hours annually, AKA enough to travel in time 49.5 times if you have a Delorian equipped with a flux capacitor.

💪  🏃 Volvo's new CEO, Jim Rowan, says if OEMs are not all in on EVs, they are already falling behind. In the months since he took the company's helm, he has focused on making Volvo a credible next-gen EV company.