TL;DR — VW is changing bosses, but (probably) not directions, GM wants everybody to remember the last 5 years was just practice and NOW they are going to take down Tesla, and Hyundai says avoiding car fires was always part of their plan, but now it is even MORE part of their plan.
No items found.
July 26, 2022 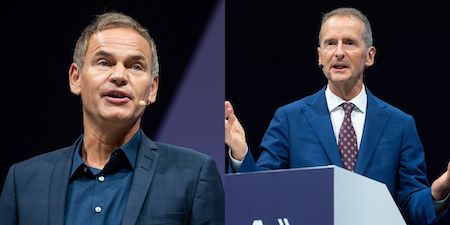 It takes about 1.7 million jobs to keep the US auto industry's pedal to the floor. While it takes the population of a small country to keep the lights on, a small group of executives often directs that work.

Volkswagen's CEO Herbert Diess will step down as of September 1, citing mutual consent but no specific reason. People following the company's recent movements note that Diess's image took a severe blow due to an emissions-cheating scandal. His replacement will be Oliver Blume, CEO of VW's Porsche brand. While the company will press into a transformation from gas-powered vehicles, Blume's interest in electrofuels may play a larger role than once expected.

Electrofuels are water mixed with carbon dioxide that generates power similarly to gas or diesel. They sport lower carbon output and a much higher price tag than EVs and standard ICE.

General Motors CEO Mary Barra announced that the company was going electric five years ago. Back in 2017, all eyes were on Tesla as the one to beat. Fast forward to today, and Tesla is still holding down 66% of the US EV market, while GM has fallen behind Ford and Hyundai at just 6%.

Following the development of GM's Ultium platform, Barra and other leaders say the company is finally in a nimble enough position to be a leader in the ongoing push toward electrification.

Hyundai and Kia have been putting in WORK lately in the EV game. A recent promotion shows the company trying to put a few years of recalls and safety issues behind them and put consumer minds at ease. Brian Latouf, who joined Hyundai in 2019 after 27 years with GM, has been promoted from North American safety chief to the automaker's global safety oversight position. The company has also added a VP of safety to ensure safety is fully accounted for and problems are quickly found and resolved.