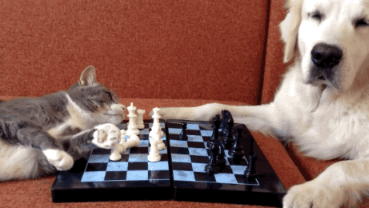 Chess has seen a major resurgence in popularity over the past few years, but nothing has driven people to the chess boards quite like Mittens.

The super grandmaster chess-bot known as Mittens might look cute, but don’t let her wide eyes and cuddly appearance fool you. She is a sassy, stone-cold assassin in virtual fur, frequently taunting her opponents during matches with unsettling statements like, “Meow. I am become Mittens, the destroyer of kings. Hehehe.”

Gluttons for punishment. Since Mittens’ introduction on Chess.com at the beginning of January, it has seen a significant increase in its traffic, averaging 27.5 million games played daily (40% more than any other month in the company’s history).

Make one and send it our way, and we will send back a music suggestion based on what you like!