TL:DR — Tesla production has been increasing rapidly since its factory in China opened. Lockdowns in the country have a direct and severe impact on the company. Musk is still swinging for the fences.
No items found.
August 16, 2022 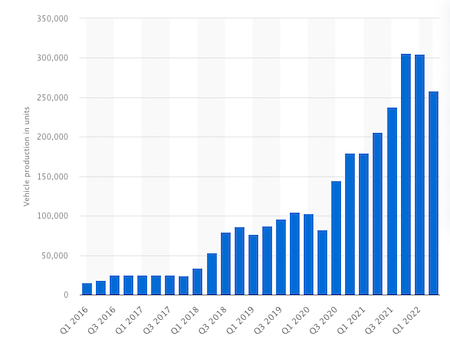 Tesla has produced over 3 million EVs since its founding in 2003. While some legacy OEMs could produce that in a single quarter, Tesla's achievement comes packed with some interesting numbers.

1/3 of the vehicles were produced in China. Production in China started in 2018 when Tesla opened the first factory wholly owned by a foreign automaker.

Q2 was down 15% from Q1's global production despite June's 25% year-over-year increase.

‍50% annual sales growth remains Musk's prediction for the year. Shares in the company are down 25% so far for 2022.