Toyota In The News

TL; DR - Toyota is still downshifting to deal with chip shortages but confident about finishing their personal race for this year and EV adoption… less so about staying relevant in zero-emission states.
No items found.
October 3, 2022 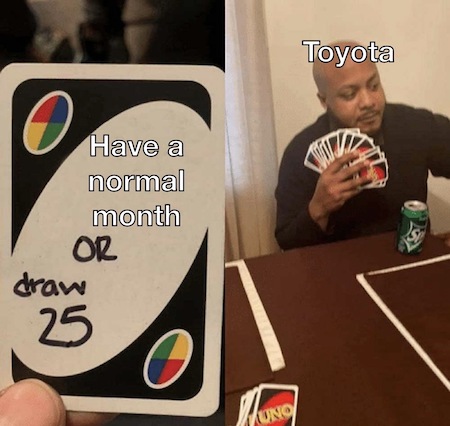 As of September 30, Toyota lowered its October production target by 6.3%, to about 750K. While chips have pestered its monthly production all year, the company maintains its nearly 10M vehicle projection for its fiscal year ending March 31.

President Akio Toyoda says there is nothing wrong with Toyota's EV strategy - and as the guy who came up with the strategy, we assumed he would say so. They will invest about $70B in electric vehicles, including hybrids, with about $35B going directly toward all-electric battery tech over the next 9 years.

Zero emissions by 2035, on the other hand... While Toyoda is confident the company will serve the diverse demand of customers, they say meeting California's 2035 goals will be "difficult." He compares the hard shift to BEVs to the "fully autonomous cars we were all supposed to be driving by now." Which we think translates loosely to "2035 is WAY over there. Y’all really think you can guess what it's going to be like when it gets here?!"