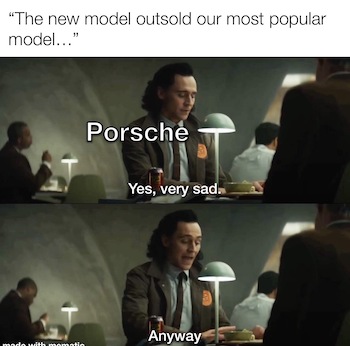 Jaguar Land Rover is training 60% of its workforce to develop, build, and service EVs. 29K employees and more workers from the brand's franchise dealers will be trained ahead of the company's ramp-up to electrification.

Long term, the two-brand company says the smaller Jaguar will abandon ICE by 2025, while Land Rover will release its first EV in 2024.

Someday we will talk about the last Legacy OEM starting their journey to electrification. Apparently, that day was not a few months ago as we thought.

Porsche has built 100K Taycan EVs since starting 3 years ago. Despite initial concerns that an electric model would not match the brand's performance standards, the Taycan has become one of Porsche's best-selling models. Of its 300K deliveries last year, the company says 41K were the all-electric sedan - even more than the Porsche 911.

A battery-operated Porsche is nothing new. Back in the 90s, they even had remote controls.

ZEM is a prototype with an exciting promise. 35 students from the Eindhoven University of Technology designed it with two carbon-capturing devices behind the front grill. This means that while ZEM stands for "Zero Emission Mobility," a more accurate name would be NEM, or "Negative Emission Mobility." Which is far less catchy, so we get it.