Looking at the Aptera makes us wonder if the designers never saw a car before or saw one and hated it so much that they specifically avoided anything familiar.
No items found.
July 19, 2022 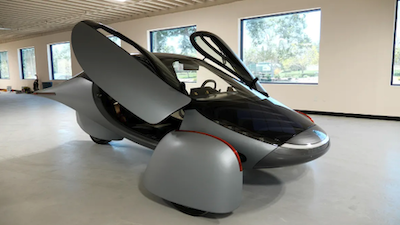 🌞 ⛺Aptera. We've all seen mention of solar power for homes and even a few ideas for vehicle applications floating around. The new Aptera is somehow both ideas but added to the eternal question, "Do you think aliens have tricycles?" The vehicle is battery and solar-powered and includes a series of folding panels that hide a pop-up camper.

Looking at the Aptera makes us wonder if the designers never saw a car before or saw one and hated it so much that they specifically avoided anything familiar.

🎮 🚦Tesla. Traffic lights got you down? Elon Musk seems to think we do not have enough to do while in our cars and have announced progress toward adding Steam to Tesla’s in-vehicle software. Tesla has not mentioned any alterations to the popular gaming platform, but a demo will probably be available next month.

"Traffic jams? You mean Minecraft parties?" -somebody in 10 years.

💪 🦅Ford. Some people buy trucks for work and some like the look and feel. A third group knows someday they may need to move the Rocky Mountains 3 inches east and buy accordingly. Ford's F-150 Raptor R is a new high-performance variant with a supercharged 5.2-liter V-8 that houses an explosive 700 horsepower and 640-foot pounds of torque. At nearly double the standard F-150, the Raptor R is one of many high-performance vehicles OEMs are producing as they seek high margins to support a move toward EVs.