The Shape Of Motors To Come

Some of his other inventions are a running robot and a super fast go-kart. With ideas like those, we may skip over EVs and into personal solar jetpacks before you know it.
No items found.
August 15, 2022 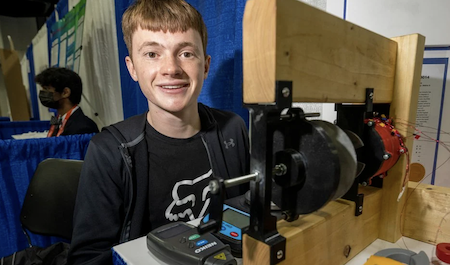 Robert Sansone, a Florida-based inventor with an impressive resume, believes he has figured out the shape of electric motors to come and has the awards to back up his claim. The technology that spins fans or powers pumps is not currently powerful enough to move an EV down the street. After a year of prototypes and torque-improving experiments, Sansone's improved synchronous reluctance motor produced force enough to win this year's largest international high STEM competition.

‍Yes, you read that right, High School. Robert Sansone is 17 years old. With over 60 engineering projects under his belt and now $75,000 in prize money for his magnetic field-based motor. His design would remove the expensive and limiting reliance on rare-earth metals from EV production in the future.